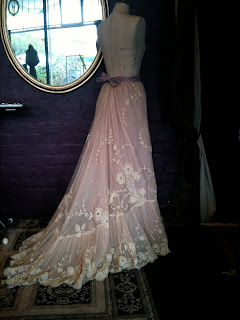 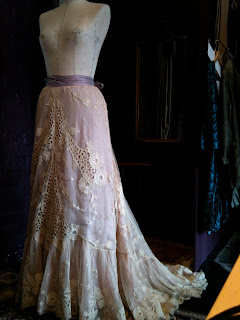 These are some of my more recently completed jobs of particular interest.

This Edwardian skirt (left) was bought to me by a friend who had found in on Ebay for $10. The lace on the outside was mostly intact, but the entire lining, a silk acetate I think, had disintegrated into barely connected strips of fabric. And there were also massive tears all through the georgette lining under the lace. 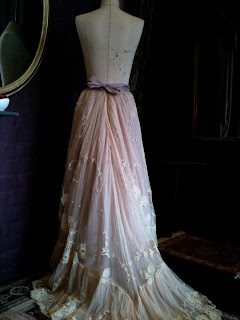 So we decided to try a rescue mission and see if we could salvage this beautiful garment.

I copied the skirt pattern and cut a silk georgette lining in softest pale pink, which creates most of the colour you can see in the skirt.
I then re-constructed a lining skirt, or petticoat, on the same 5-gore pattern, with all the extra volume gathered at the back to create the (small) bustle shape. The hem of the petticoat was constructed with concentric strips of bias taffeta to give fullness at the hem, and edged with a large ruffle for good measure.
I used a blue-shot pink polyester-spandex taffeta for the petticoat that gave the skirt some depth of colour under the lace and georgette. The same fabric is used for the waistband/sash, and is washable: hooray!

This cocktail dress was commissioned by a
client to wear at several black tie events,
over the coming months. 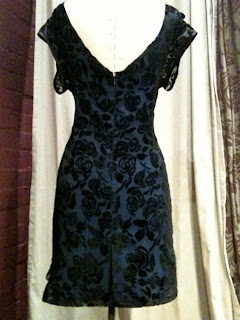 She wanted a flattering and easy-to-wear dress that she could bundle up in a suitcase of necessary. She loved the midnight blue colours, and also like the idea of velvet. She definately didn't want "another black dress". 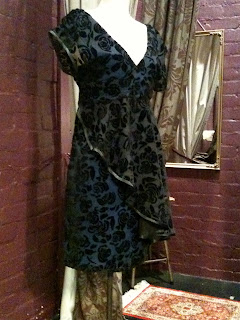 The design challenge with this dress was to create an after-five dress that wasn't too frilly, but would enhance the client's femininity, as well as making her feel special.

Softness and drape were a special part of her requirements. I ended up using a blue polyester jersey as the "lining", over- laid with rayon velvet patterned with devore roses. It was a challenging fabric combination to use though, and I would definitely re-consider such a choice in the future, although I love the final look of the fabrics together.

Lastly is a fantastic linen/silk jacket/blouse that's in-progress at the moment. 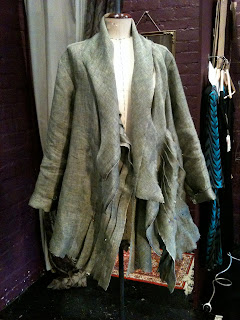 This has been a long-running commission for a client who sews herself, but was seeking a variation in her wardrobe, and something interesting for her larger size.

She found the fabric online, and bought a whole roll.

I have to say its one of the most amazing fabrics I have ever used. It has a twill pattern, but is extremely light and as open as a linen weave. It hangs beautifully and shines in the daylight. Its kind of like what I imagine they made the Hobbit's Elven cloaks out of for Lord of the Rings. Hows that for a nerdy reference?

Anyway, I am using pleating, sewn almost flat across the from to create texture, and rolled bias strips as a collar, that will overlap across the front.

Final photos to follow!
Posted by Lady Lissom at 11:23 AM